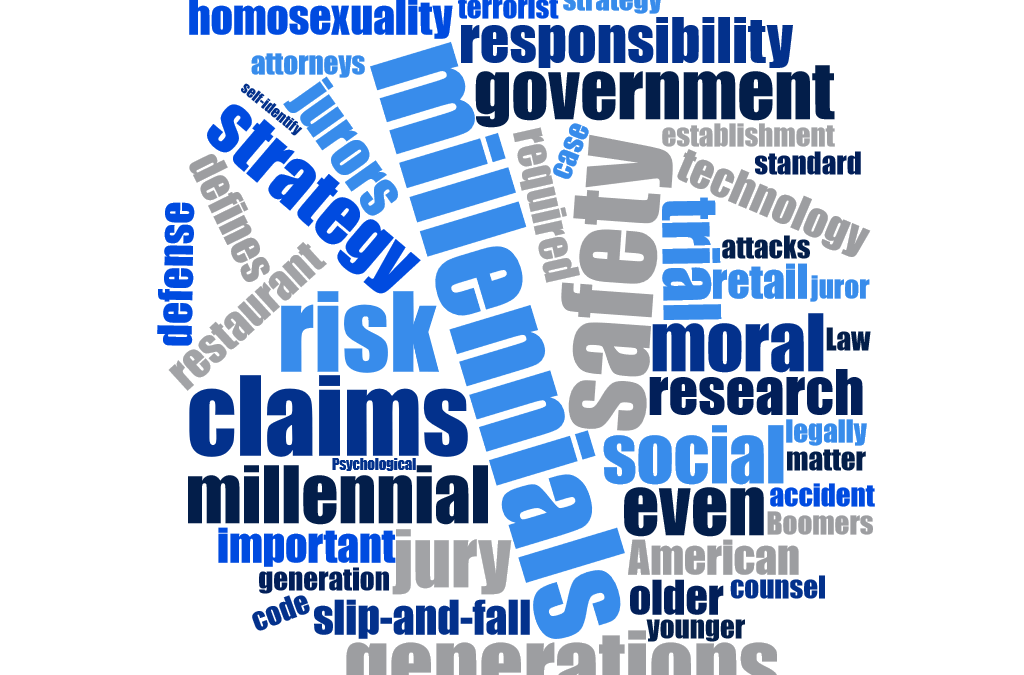 How the Changing Mindset by Millennials Affects Your Jury

Millennials make up a larger percentage of your customers, employees, and yes, even jury pools, than any other generation. Knowing that, it is important to see millennials beyond the stereotypes and determine how they are going to affect the outcome of your case.

Best Lawyers has published their list for over three decades, earning the respect of the profession, the media, and the public as the most reliable, unbiased source of legal referrals. Its first international list was published in 2006 and since then has grown to provide lists in over 75 countries.

Defense counsel, in conjunction with their claims professional, should be thinking offensively from the outset in their resolution strategy so as to maximize their leverage in settlement negotiations as well as their advantages in litigation.

On July 22, 2019, the Department of Labor (DOL) issued an opinion letter—FLSA2019-10—to address whether the time a truck driver spends in a sleeper berth is compensable under the Fair Labor Standards Act (FLSA).

This opinion letter withdraws the DOL’s previous opinion that employers could only exclude up to eight hours during a trip that was at least 24 hours long. The opinion letter also adopts an “on-duty” test as the most appropriate way to determine whether sleeper berth time is compensable.

UPDATE: Just When You Thought You Knew Everything About Pay and Quit Pursuant 38.2-2206 Here Comes the General Assembly Again!

Written by Kate Adams, Esq. Edited by Bill Pfund, Esq.  Summary judgment in Virginia state courts, unfortunately, has been akin to finding a four leaf clover, we all know it exists but it is rarely ever granted. However, with the passage of Senate Bill 1486 and a recent decision from Judge David Bernhard of Fairfax Circuit Court, the constraints regarding the type of evidence a court may consider when hearing such motions  is expanding, making summary judgment more attainable. As reported in the KPM April 2019 Newsletter, Senate Bill 1486 has passed and went into effect on July 1, 2019 which expands the provisions of Virginia Code §8.01-420 and provides that “discovery depositions under Rule 4:5 and affidavits may be used in support of or opposition to a motion for summary judgment in any action when the only parties to the action are business entities and the amount at issue is $50,000 or more.” Although this change is narrowly tailored to business entities and cases where the amount at issue is over $50,000, this may pave the way for more opportunities to obtain summary judgment in Virginia. A May 24, 2019 ruling by Judge Bernhard addressed the type of evidence a court can consider when ruling on a motion for summary judgment. In HCP Properties-Fair Oaks of Fairfax VA LLC v. County of Fairfax, Judge Bernhard considered “whether a party can use a deposition of a Corporate Designee of an adverse party in support of its “Plea in Bar” seeking the dismissal of an action, in light of the stricture of Virginia Code §8.01-420 on the use of depositions...

Written by Andy Webb, Esq. Edited by Gary Reinhardt, Esq. What is Sovereign Immunity? The doctrine of sovereign immunity is “a government’s immunity from being sued in its own courts without its consent.”  Black’s Law Dictionary, 4th Pocket Ed.: “Sovereign Immunity”.  The doctrine is as old as American law itself.  Like many of the initial common law doctrines in America’s jurisprudence, the doctrine of sovereign immunity grew out of British law.  The famous 18th century English legal scholar, William Blackstone, described the reasoning behind the doctrine when he said “the law also ascribes to the king in his political capacity, absolute perfection. . . The king can do no wrong . . . The king moreover, is not only incapable of doing wrong, but even of thinking wrong.”  1 William Blackstone, Commentaries on the Law of England 245 (1809) (emphasis in original). Over the generations, the absolute immunity ascribed to the king by Blackstone has slowly eroded.  For example, the Virginia General Assembly waived sovereign immunity in certain situations when it passed the Virginia Tort Claim Act—Va. Code Ann. §8.01-195.3—which allows citizens to directly sue the Commonwealth.  Despite the gradual erosion of the doctrine, “sovereign immunity is ‘alive and well’ in Virginia.”  Messina v. Burden, 228 Va. 301 (1984). Governmental Employees and Sovereign Immunity As noted by the Virginia Supreme Court, “The Commonwealth of Virginia functions only through its elected and appointed officials and its employees” and “[i]f because of the threat of litigation . . . they cannot act, or refuse to act, the state [itself] also ceases to act.”  James v. Jane, 221 Va. 43 (1980).  This...

Summer is in swing and a review of swimming pool liability issues seems in order. First the statutory law on the subject:

For the purposes of this section:

“Swimming pool” includes any outdoor man-made structure constructed from material other than natural earth or soil designed or used to hold water for the purpose of providing a swimming or bathing place for any person or any such structure for the purpose of impounding water therein to a depth of more than two feet.

Coming Soon: Changes to a Statute Near You

Many of us authorize medical treatment during the investigation of a claim, when the injured worker is unrepresented, and when no claim has been filed in an effort to limit exposure without a formal award being entered. However, your ability to do this without potential longstanding effect is soon coming to an end…As of July 1, 2019, any medical treatment authorized and paid for BEYOND a six month period, will impact the statute of limitations for which an injured worker has to file a claim and will act as a basis for the tolling of the statute of limitations.

Fraud in the Insurance Industry

Written by Porter Peery, Esq. Edited by Bill Pfund, Esq. According  to insurance industry estimates fraud accounts for approximately 10% of the property/casualty insurance incurred losses and adjustment expenses each year (1).  Based on this estimate, between 2013-2017 property and casualty fraud totaled about $30 billion each year. Automobile accident fraud is one of the most widespread and lucrative fraud schemes nationally. The National Insurance Crime Bureau receives over 60,000 questionable claims each year half of which involve auto accidents (2). Of note, these auto accident schemes are becoming more violent, especially in large metropolitan areas, and often involve large organized rings. Closer to home, the Virginia State Police Insurance Fraud Program 2018 Annual Report indicates that $13,566,013 in fraudulent insurance claims were attempted in Virginia in 2018, a 19% increase from 2017. Disturbingly $3,665,817 in fraudulent insurance claims were actually collected in 2018, a 48% increase from 2017. Since insurance fraud is constantly evolving in the present high tech environment, the approach to detect and prevent fraud must regularly change to keep pace.  Insurers have prioritized combating fraud. Approximately 40% of insurers polled by the Coalition Against Insurance Fraud and SAS Institute in 2019 said their technology budgets will be larger. About 90% of the companies which responded said “they use technology primarily to detect claims fraud”, a significant increase from 2016…(3). Insurers are now able to use “predictive and entity analytics” as new information is added which improves detection capabilities for fraudulent activity (4). At the end of the day, however, any flagged accounts must be reviewed by a well-trained claims’ fraud professional. Most insurance companies now have...
« Older Entries
Next Entries »